You Are Here:Home>Obituaries>Thomas Bryan Smith 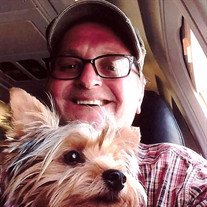 Thomas Bryan Smith, 56, of Thorntown, Indiana, passed away at Witham Memorial Hospital on January 30, 2021. He was born on May 2, 1964 in Lebanon, Indiana, the son of Richard and Jean (Giles) Smith.

On May 6, 1989, Bryan was married to Marla (Powers) Smith at Walnut Grove Church in Thorntown; she survives.

Bryan was a construction laborer for the Labor Union 274. He was a member of the American Legion in Thorntown. Bryan enjoyed spending time with his grandkids, fishing, reading, painting, arts and crafts, and planting flowers.

A private family gathering with military rites will be held on Wednesday, February 3, 2021 at Myers Mortuary, 1502 North Lebanon Street, in Lebanon.

Boone County Crematory has been entrusted with his cremation arrangements.

Memorials may be made in his memory to the charity of the donor’s choice.