You Are Here:Home>RadioMom Local News>Truck Driver Flown From Crash Scene With Serious Injuries 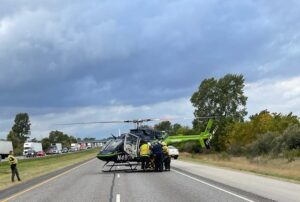 On Saturday afternoon, troopers from the Lafayette Post were investigating a crash on I-65 northbound lanes near the 165 mile-marker.  As a result of that crash, there was a traffic backup that extended several miles.  911 callers reported a semi had rear-ended another semi in the backup at a high rate of speed near the 155 mile-marker.  Responding officers located a white 2005 Volvo semi that had struck a 2020 Freightliner.  The driver of the Volvo, Semir J. Prijic, from Skokie, IL, had to be extricated from the cab of the truck and flown by St. Vincent’s to Indianapolis for treatment of severe injuries.  The driver of the Freightliner was not injured. The roadway was closed for approximately 5 hours for crash scene cleanup and for treatment of the injured.

Assisting at the scene were the following:  Zore’s towing, INDOT, Clinton County Sheriff’s Department, and the Perry Township Fire/EMS.