You Are Here:Home>RadioMom Local News>Two Semi Tractor-Trailers Collide Resulting In A Chemical Spill 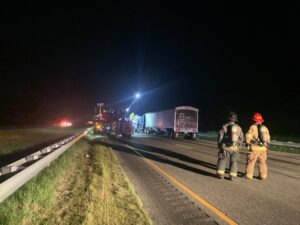 At 2:42 PM Monday, the Boone County Communications Center dispatched an accident with injury involving two semi tractor-trailers at the 142.2 mile-marker of Interstate 65 southbound. It was reported at this time that one of the semi’s was hauling Acetic Anhydride, and that due to the collision the chemical agent was leaking out of the tanker trailer and onto the roadway. Once deputies arrived on scene, it was reported that the semi with the tanker trailer, Quest Liner, had slowed for slowing traffic on Interstate 65. The second semi, Mike Haas Trucking, was behind the Quest Liner tanker and did not get stopped in time. As a result, the Mike Haas Trucking semi rear ended the Quest Liner tanker. The two drivers involved in the accident were transported to a nearby medical facility for treatment for minor injuries. We ask that you avoid this area for at least the next 2 hours while emergency personnel work on removing the two vehicles involved and cleaning up the chemical spill from the roadway. The interstate was reopened at 4:40 this morning.