You Are Here:Home>RadioMom Local News>Vehicle Pursuit Ends With Capture Of Wanted Subject 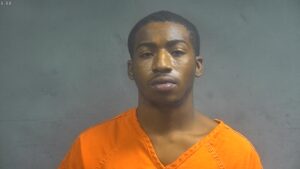 On November 11th , 2020 at approximately 1:47am, the Thorntown Police Department (TPD) attempted to make a traffic stop on a grey Ford Explorer that was northbound on Interstate 65 near the 147 mile-marker, for simple traffic violations (Speeding, Unsafe Lane Movement, Following Too Closely). The grey Ford Explorer then fled northbound on I-65 in an attempt to elude law enforcement. At this time, officers from the LebanonPolice Department and the Boone County Sheriff’s Office responded to assist with the pursuit. During the pursuit the grey Ford Explorer crashed as it attempted to cross the interstate median. A subjectthen exited the vehicle and fled on foot westbound into a field. A search of the subject ensued at this time. During the search, it was found that the grey Ford Explorer was reported stolen out of Louisville, KY. As officers continued their investigation, they found an ID card belonging to a homicide victim from Louisville inside of the vehicle. As the search continued, Clinton County Dispatch received a call of a suspicious person in the area with a firearm on his hip around 6:13am. The Clinton County Sheriff’s Office (CCSO), TPD, and BCSO responded to the area where the subject was reported to be walking southbound. A black male, wearing a white t-shirt and black jeans was spotted by law enforcement and began fleeing through a cultivated corn field. At this time, a perimeter was set up by the BCSO, CCSO, TPD, LPD, and the Indiana State Police (ISP) in the area of the 150 mile-marker of I-65; the Boone County / Clinton County line.
At 9:15am, after an extensive search, the male subject was located, hidden in thick brush of I-65 at the 150 mile-marker. Once located, the male subject was detained and transported to Witham Hospital for checkout. A firearm was not found at the time of apprehension, law enforcement continues to exhaust all efforts to locate the gun. After checkout, Mr. Kameron L Butler (20 yrs) out of Louisville, KY was transported to the Boone County Jail. Mr. Butler was wanted out of Louisville, KY for Escape, Failure to Appear, and Probation Violation. Butler will also be facing local charges as well.