You Are Here:Home>Obituaries>Vincent Jude Muller 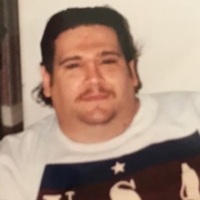 Vinny was born Jan. 18, 1966, in Evansville, the beloved youngest son of Stella Madeline (Merry) Muller and the late William Herman Muller; his mother always said he was the most beautiful baby. He married Patricia Margaret Williams on June 11, 2005.

Vinny was always very smart and funny, teasing people whenever he had the chance. Family was especially important to him; Vinny was an excellent father and he loved his nieces and nephews dearly. He also loved music, especially Led Zepplin, and was supportive of his neighbor’s band. Vinny also enjoyed cooking and was a Steelers football fan.

Family and friends will gather Saturday, Sep. 25, for visitation from 1 p.m. until the time of the funeral service at 3 p.m. in the Strawmyer & Drury Mortuary, 2400 N. Lebanon Street, Lebanon. Memorial contributions in his memory may be made to the American Heart Association.