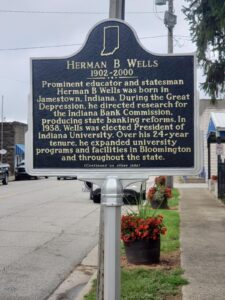 For his contribution to higher education, Indiana University and banking, an Indiana Historical Bureau marker honoring the Jamestown birthplace of Herman B Wells was dedicated earlier this month. Wells is remembered most for his time as president and then chancellor of I.U. However, he also worked with area banks and eventually the Indiana Bank Commission. His research for the commission led to statewide banking reforms during the Great Depression. Then he was on to Indiana University as president and then chancellor, the university’s first. More details in the Lebanon Reporter.