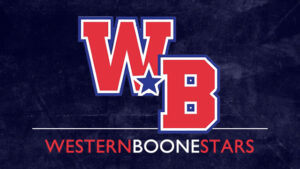 Josiah Smith booted a 38-yard field goal with :07 left to lift Western Boone to a thrilling, 36-35 win over Fort Wayne Bishop Luers in the Class 2A championship game.

The Stars (11-4) scored 10 points in the final 1:36 of the contest to overcome a 35-26 deficit and claim their third-straight state title and 18th consecutive tournament victory.

The back-and-forth contest featured plenty of offense as the teams combined for 795 yards and 43 first downs in addition to the 71 points.

Luers (8-7) held a 21-13 lead at halftime. Behind the passing of quarterback Carson Clark, the Knights were able to take advantage of two Webo turnovers to build the nine-point lead after Clark connected for his second touchdown pass to Krashaun Menson (a 7-yarder) with 3:38 left.

Coach Justin Pelley’s Stars used a ball-control rushing attack to sustain their offense. Fullback Robby Taylor, who had a state-record 43 carries in the game, scored on a 1-yard run with 1:36 left to pull Webo within 35-33.

A failed onside kick seemed to spell doom for the Stars, but the defense came up with a three-and-out and forced a punt. Western Boone benefitted from a kick-catch interference penalty to give it a first down at its 46 with :39 left. Five plays later, Luers was flagged for pass interference giving the Stars a first down at the Knights’ 21. Smith, the son of former Colts punter Hunter Smith, came on to boot the game-winner.

Taylor finished with 210 yards and two scores, while Clark completed 17-of-21 passes for 303 yards and three touchdowns. Glenn Brody caught six of those passes for 171 yards and a 78-yard touchdown.