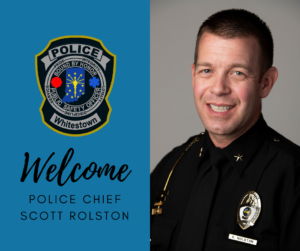 Whitestown, Ind. – The Town of Whitestown has announced the hiring of its new Chief of Police, Scott Rolston, following the retirement of Dennis Anderson who served in the role the past 12 years.

“Throughout my time at Whitestown, I have led both the Investigations Division as well as the Operations Division,” said Rolston. “Chief Anderson has been a great leader and mentor. He helped to set the groundwork for an outstanding department, and I look forward to continuing to build on what he started.”

Rolston, a Boone County native, has 15 years of law enforcement experience. He joined the Whitestown Metropolitan Police Department in 2009 and was promoted to Assistant Chief of Police earlier this year in preparation for his new role.

“Chief Anderson has led the Whitestown Metropolitan Police Department with honor and integrity for the past 12 years, and we thank him for his service,” said Whitestown Town Council President Clinton Bohm. “We look forward to seeing Scott build off this foundation, and I am confident that he will serve all the residents of Whitestown well.”

“My team and I have several ideas for new community programs and growing current ones that we have been committed to over the years,” said Rolston.

Rolston is an avid golfer and actively involved in his local church’s food pantry.