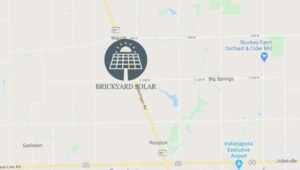 A Map showing where the solar farm will be located.

A large solar farm project built on 1,000 to 1,400 acres and capable of generating 200 megawatts of energy is proposed for land north of Zionsville, along U.S. 421 between County Roads 200 and 300 North. The farm would have 675,000 panels that will track the sun. Called the Brickyard Solar project, the farm would be developed, constructed, owned and operated by a Florida company called NextEra Energy Resources LLC, or a subsidiary. The investment would be $200 million into Boone County and the project is expected to generate $27 million in tax revenues over the life of the farm. More details in the Lebanon Reporter.