A Missionary In Our Midst – The Journey Of Pastor Emmanuel Penumaka

You Are Here:Home>RadioMom Local News, What's Happening>A Missionary In Our Midst – The Journey Of Pastor Emmanuel Penumaka

A Missionary In Our Midst – The Journey Of Pastor Emmanuel Penumaka

What would take a man from a law career in India to the post of pastor at a small Lutheran church in rural Indiana?

Raised as a Lutheran in a country that is 80% Hindu, 7% Muslin, and just 2.3% Christian, Pastor Emmanuel Penumaka still had a somewhat traditional Indian upbringing. It is common in India for children to follow their parents’ recommendations on choosing careers and even spouses. Emmanuel’s father had asked each of his three sons to enter the religious life, two of them did, but fate intervened for the third. Just days after 18-year-old Emmanuel discussed his career path with his father, his 16-year-old sister died, causing him to turn away from the ministry. Instead, he went on to earn a B.A in Economics and a law degree with which he became a prosecuting attorney. 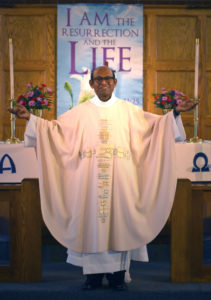 After working in the prosecutor’s office for one year, Emmanuel found that he didn’t like the negativity of the work and one particularly bad rape case lead him to reconsider his career path. Without intentions of becoming an actual pastor, he studied Theology, but found himself drawn to sharing the gospel. He earned a bachelor of divinity degree from United Theological College in Bangalore, India and was ordained in Andhra Evangelical Lutheran church. He ministered in both rural and urban parishes in India and became involved in the Student Christian Movement of India. In this capacity he worked with the students to overcome poverty and move away from the cast system still prevalent in Indian society. He encouraged male students to forgo the traditional dowry associated with marriage. He also worked with the students to support local trade by eating natural, locally sourced foods.

In 1996 Emmanuel left India to earn his master’s degree at the Lutheran Seminary in Hong Kong. There he eventually met his wife, Brenda, who was a missions committee member at the time. Brought up in a traditional Chinese Buddhist family, Brenda had attended a Christian school and chose to embrace Christianity in the 7th grade after being profoundly moved by a picture of Christ on the cross. They knew each other for a year and a half before realizing they were falling in love. Their courtship was unusual because, in keeping with Indian tradition, they did not actually date. In fact, Emmanuel called his father to ask his permission to marry and to see if he wanted to meet Brenda to give his approval. Instead his father gave his blessing, telling Emmanuel that, as a pastor, he should be able to choose the right wife. They were married in 2000. Their sons, Chris and Steve, were born in 2004 and 2006. 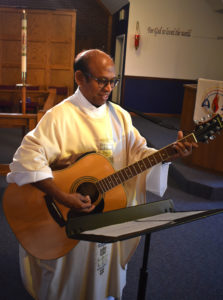 While in Hong Kong, Emmanuel served as a pastor in a Chinese congregation which taught him a great deal about Chinese culture and the struggles many face dealing with the demands of China’s highly competitive work environment. He also served as a pastor in the Methodist Church, where he is still considered an Elder.

After 15 years in Hong Kong, and ten years of marriage, Emmanuel made the choice to continue his education at the Lutheran School of Theology in Chicago. After spending so many years in primarily Hindu and Buddhist countries, he wanted to understand what it meant to be a Christian in a Christian country.

He and Brenda also believed it would give their sons an opportunity to understand more about different customs and enjoy greater freedom of thought. Brenda gave up a good job in the hotel industry to help move the family to Chicago. At first they experienced culture shock, seeing so many diverse people interacting in American society, but as Emmanuel completed his studies they came to appreciate this more open public interaction.

When it came time for Emmanuel to apply to become a pastor, the family agreed to consider a somewhat rural community, like Lebanon. The reason made sense. They had all experienced what it felt like to be a part of a minority religion in counties where practicing Christianity could be challenging. They reflected on how missionaries from the United States had helped them over the years. Now they were in the United States where there were many big beautiful churches and all were free to worship, but the pews were still empty. You might say Pastor Emmanuel Penumaka is now a missionary of sorts, right here in Lebanon, Indiana, giving back what was given to him and his family by inviting all to enjoy their freedom to worship. He delights his congregation at Trinity Lutheran Church with his kind, thoughtful manner, and amazes them with his depth of knowledge, his ability to speak and understand multiple languages, and his musical talent. 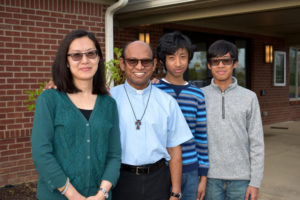 If you’d like to learn more about this missionary in our midst, you are invited to join Trinity Lutheran Church for worship Sunday mornings at 10:30 am. The church is located on Elm Swamp Road in Lebanon, Indiana.