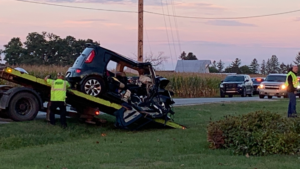 Credit: WTHR/Scott Graber
Boone County officials said the driver and a 14-year-old female passenger were killed in a single-vehicle crash Friday morning. Four other minors were injured as well.

The first occured at approximately 2:45 AM on September 3, 2021, the Boone County Communications Center received a phone call from a good Samaritan stating that they had located a single-vehicle accident in the area of County Road (CR) 300 S & CR 1200 W. Upon law enforcement’s arrival on-scene, a silver Nissan passenger car was found crashed into a tree. The preliminary investigation indicates that the driver, Christopher Harris (23 yrs) of Crawfordsville, IN was traveling Westbound on CR 300 S, in the 12000 Block West, when for an unknown reason the vehicle exited the roadway striking a tree. Mr. Harris was deceased upon law enforcement’s arrival. This incident is still under investigation

In the second accident police confirm that two people died in a crash this morning, a 14-year-old girl and the male driver, whose age was not immediately available. Both were declared dead at the scene of the crash, near County Road 650 east, by the Boone County coroner. This all began as a police pursuit out of Lawrence in Marion County. Four other juveniles ranging in age from 12 to 16 were also in the crashed SUV and taken to Riley Hospital for Children and St. Vincent Hospital in Indianapolis. Boone County Sheriff Mike Nielsen said his department was not involved in the pursuit.  Lawrence Police Deputy Chief Gary Woodruff said Lawrence Police began pursuing the SUV around 4 a.m. and the chase covered part of the east side of Indianapolis before heading north on Interstate 65 into Boone County. At that point, police terminated their pursuit. Crash investigators from Boone County are working to determine what led to the crash and State Road 32 was closed from Boone County 600 East to U.S. 421 until just before 8 a.m.