You Are Here:Home>Obituaries>Alvin David Budd 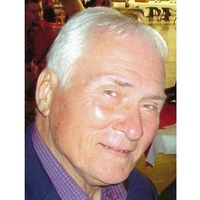 David was born July 11, 1934, in Center Township, a son of the late Durbin and Genevieve Budd. He married Kathleen German on December 10, 1966 in Lafayette, Indiana; she survives.

David graduated with a degree in biochemistry from Purdue University, and following college, joined the Armed Forces as a first lieutenant in the Transportation Corps stationed in Fort Eustis, VA. He was a member of the FarmHouse Fraternity and Purdue Livestock Judging Team.

When he returned home, David entered the science field as an analytical chemist in Indianapolis. He also worked at American Agricultural Chemical in Illinois, doing analytical work on fertilizer.

David and his wife, Kathy, farmed two family farms of 400 and 200 acres, raising mostly corn and soybeans. He also maintained a herd of Shorthorn cattle with his father. One of their most remembered awards was having the highest indexing beef bull over all breeds in the state of Indiana for three separate years- 1962, 1964, and 1966. David was also active in 4-H and was a leader for nine years of the Doverites club. He was a 10-year member, showing beef, swine, and sheep in the county and state fairs. David was also the Jefferson Township trustee for more than 20 years. After retiring from farming, he worked at Perfection Products in Lebanon.

His hobbies included collecting antiques and painting.  Many of his paintings are on display in the homes of family and friends. For many years he raised and showed cattle and pigs. David attended Otterbein Methodist Church and was a past member of the First Presbyterian Church in Lebanon.