You Are Here:Home>Obituaries>Anita A. (Leisure) Gant 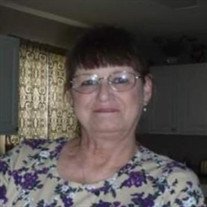 Anita A. (Leisure) Gant, 72, passed away on Monday, April 5, 2021 at her home in Lebanon with family by her side. She was born in Elwood, Indiana on January 23, 1949; a daughter of Lloyd H. McPhearson and the late Patricia A. (Dillon) Jones

She attended Wendell Wilkie High School in Elwood, Indiana. On July 13, 2001 she was married to Michael E. Gant; he survives.

Anita was an inspector at RGF of Elwood and employed with Acraline Products in Tipton, Indiana before retiring in 2008. She was a kind and genuine person who cherished her family. She also enjoyed fishing, working puzzles, BINGO and golfing with her family.

In addition to her mother, Anita was preceded in death by a daughter-in-law, Nichole Gant; siblings, Jon McPhearson, Sharon Shannon and LuAina Severance; and sister-in-law, Sue McPhearson.

Visitation is planned from 2:00 p.m. until the time of service on Friday at the funeral home in Lebanon. For those unable to attend, Myers Mortuary will have live streaming on Myers Mortuary Facebook page.
Burial of ashes will be held at a later date at Oak Hill Cemetery in Lebanon. Myers Mortuary and Boone County Crematory are handling her cremation arrangements.