You Are Here:Home>Obituaries>B. Duane Morris 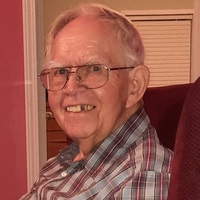 Duane graduated from Arsenal Tech High School, and then went on to serve in the U.S. Marine Corp. during the Korean War. He worked as a lithographer for Howard W. Sams for many years. Duane enjoyed bowling, along with playing euchre and BINGO at Boone County Senior Citizens. He also enjoyed travelling, along with taking his family camping when they were younger. He was a member of the Lebanon VFW.

In addition to his parents and his wife of 61 years, Duane was preceded in death by his sisters, Emily Lucas and Norma Brown.

Family and friends will gather Wednesday, Oct. 27, for visitation from 11 a.m. until the time of the funeral service at 1 p.m. in the Strawmyer & Drury Mortuary, 2400 N. Lebanon Street, Lebanon. Duane will be laid to rest at Oak Hill Cemetery in Lebanon.