You Are Here:Home>RadioMom Local News>Baldwin Elected To AIC District Office 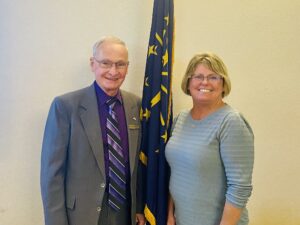 Pictured in photo are Nikki Baldwin and Paul Sinders

“I am honored to be re-elected as Vice President to represent the fourteen counties in the West Central District,” said Nikki Baldwin. “It is a privilege to work with the AIC and county elected officials throughout the state of Indiana to better our county government.”

As District Vice President, Baldwin represents the elected county officials in the West Central District of the state, which includes the following counties: Boone, Clay, Clinton, Fountain, Hendricks, Montgomery, Morgan, Owen, Parke, Putnam, Tippecanoe, Vermillion, Vigo, and Warren. There are six districts in the state. Baldwin serves on the AIC’s Board of Directors, which determines policies and legislative goals for the Association.

Clay County Commissioner, Paul Sinders was elected District President during the meeting as well. The meeting also included a synopsis of the 2022 Indiana Legislative Session by AIC legislative staff.