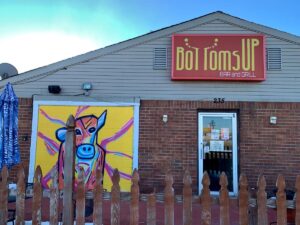 Bottoms Up Bar and Grill at 235 W. Cox Ave., Lebanon, is under fire and facing a March 10 hearing by the city for having an unsafe building. In a legal advertisement published Feb. 20 in The Lebanon Reporter, it was announced that the owner, Michael Wasser Holdings, has until the hearing to “abate the deficiency.” The order announced a public hearing would take place at 1 p.m. March 10 to answer for violations of the state law and local unsafe housing ordinance. Specifically, the order requires “vacating of an unsafe building; extermination of vermin in and about the unsafe premises; removal of trash, debris, fire hazardous material or a public health hazard in and about the unsafe premises.” The order goes on to give the owners a chance to repair the violations and bring the building under compliance. The restaurant has been working with the Lebanon Fire Department and the Boone County Health Department to get the building in compliance by March 1.  More details in the Lebanon Reporter.