FRANKFORT, Ind. – Receiving the majority of 32-votes cast during the Saturday, February 5, Republican Caucus held at the Neighborhood Center, retired-business-man and previous commissioner Bert Weaver was sworn-in today at 10 a.m. in the Clerk’s Office of the Clinton County Courthouse as the next District 1 Commissioner. Weaver joins commissioners Jordan Brewer and Josh Uitts on the three-panel board.

Weaver replaces Mark Timmons who resigned after serving just over 1-year of the 4-year term when he moved outside of district 1. Weaver will serve the remainder of the term.

Weaver shared his thoughts on Saturday after the win.

Weaver spoke about previously serving the community as a commissioner from 2012 through 2016 and what he learned then that will be an advantage now and going forward.

“I had always been in business and never was a politician so it was a hard adjustment for me the first year or two in that there are so many different functions within the county that it is not like running a business.

“In the business world, I was able and in the position where I made the decision myself. So, I saw a good idea, I went and did those things. Well, in politics it takes a community to do that and you need to have support and communication with a lot of people.

“So I think an advantage is just that – we need to work on our communication. I feel like I am a good communicator. (In my previous term) we were able to build ConAgra and bring it here, we were able to negotiate St. Vincent’s exit and at the same time build a new hospital. Those were great things for our community. Those kinds of things took a lot of collaboration, a lot of work, and effort. It wasn’t one person – it wasn’t myself – but through a group of two or three or four people, we were able to accomplish it.

The next commissioners meeting will take place Monday, February 14 at 9:00 a.m. in the Clinton County Courthouse. 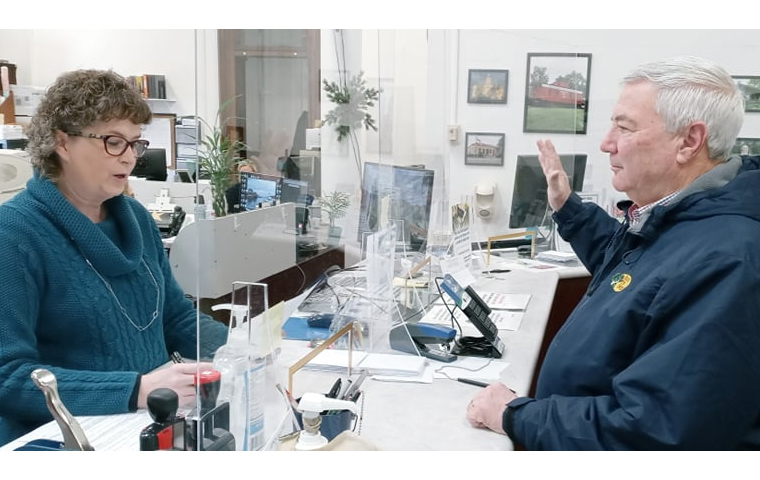 Bert Weaver is sworn-in on Monday, February 7, 2022, as the next District 1 Clinton County Commissioner by Kimberly Jacoby of the Clerk’s Office.