You Are Here:Home>Obituaries>Bertha Kurr Bears 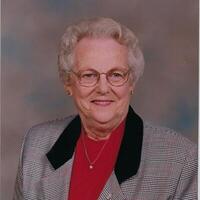 Bertha was born June 22, 1921, near Louisville in Clay County, IL, to the late C. William and Florence Heath Kurr. She was raised in a Christian home and accepted Christ as her Lord and Savior in her early teens. She married Wayne L. Bears on Oct. 17, 1946. They lived in Indiana for five years and then moved to Olney, IL, where their three children were born. She cared for her parents for five years and after their deaths in 1958, the family moved to Wooster, OH.

A few years after the death of her husband in 1993, she moved to Lebanon, IN to be close to her daughter, Diane Marshall. Diane later died of cancer in 2007. Bertha was a member of the First Community Church of Lebanon since 2003 and an active member of the Lebanon Senior Citizens Club.

Bertha was preceded in death by her husband, daughter, three sisters, and five brothers. She is survived by her two sons, Dean (Kathleen) and Dennis (Cindy); three granddaughters, three grandsons, four great-grandchildren, and many nephews and nieces. She will be sorely missed by all who loved their Grammy dearly.

Family and friends will gather Tuesday, Jan. 5, 2021 for visitation from 9:30 a.m. until the time of the funeral service at 10 a.m. in the Strawmyer & Drury Mortuary, 2400 N. Lebanon Street, Lebanon. Bertha will be laid to rest at Galveston Cemetery in Galveston at 1 p.m. You are invited to visit the website www.strawmyerdrury.com where you may sign her online register and leave a personal message.