“The first pioneers in 1822 – 1824 found unbroken wilderness, no roads, no mills, deep-tangled brush and vines, and a good portion of the land covered with water.   The water flows in almost every direction in Boone County,….” in the History of Boone County, A few Facts About Boone County. (DNR in.gov). 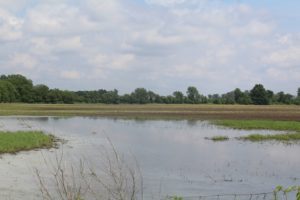 I ended my last treatment of the development of farming in Boone County 1820 to present, I left you with the admonition to pull on your waders and follow me. There was a reason. It was water, water, water everywhere. Trappers and hunters made out quite well for the time.

Some of the early settlers, (between 500 and 766 depending on the source) before the county was made official, saw the potential in the existing waterways, and built saw mills and grist mills to turn out finished lumber for building and meal or flour for cooking.

It is hard to believe now, when I look out the window and see a mile of soy beans in one direction and a mile of corn in another, that this land, on which I live, was largely underwater and heavily forested with hardwoods—beech, oak, hickory and walnut among others.

A ridge transverses the county and the water drains west northwest for part and south southeast for the rest. Ultimately, those flows dump into the Wabash (“far, far away”) and the west fork of the White River respectively.

While “Yankee ingenuity” put the creek flow to good use the remaining water was much like a swamp and the majority of the movers into the “Northwest Territory” were farmers. Aqua farming was a couple of centuries into the future so the few who could find “high” ground provided sustenance by planting and cultivating certain native produce: squash, gourds and native “grasses” from which the seeds could be harvested and ground for the above mentioned meal and flour. And where they could they planted and harvested grains and other seeds that they had brought with them to the west.

Certainly they hunted wild animals for meat and hides which added to the few domesticated cows and oxen, sheep, pigs and chickens which they had brought with them. Settlers were beginning to move into what would be the county in the early 1820’s.

John Clauson, Sr. bought land on Sugar Creek and constructed the first mill (Thorntown Library vertical file) using round logs. Hewn or shaped logs came later. He enlisted the services of local Indians to drag brush into the creek and soon the branches and leaves trapped enough silt to hold back and raise the water level high enough to turn the mill wheel.

In 1830 when the county was founded, enterprising individuals bought “Land patents”. Some of the early purchases were 80 acres, a few bought more and many were lesser parcels. The Boone County Tract Book notes “Ruben Smith bought 41.69 acres in 1834.” (Thorntown Library Collection)

By 1840, the census (numbers rounded down) recorded 1200 people employed in agriculture, 3600 mules and horses, 6000 sheep which produced 9000 pounds of wool and 7 tons of potatoes were harvested just to get us started.

They found some high ground somewhere.

Keep your waders on.

Note: several weeks ago I wrote about Charles R. Acton but transposed his first and middle names. My thanks to his daughter for catching the error.