You Are Here:Home>RadioMom Local News>Boone Deputy And Bloodhound Assist In Silver Alert 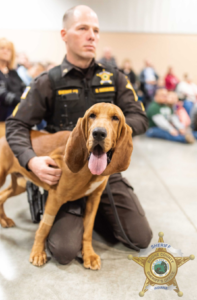 On Christmas day, 12/25/2021, at approximately 8:35 AM, public safety agencies from across Indiana received a statewide Silver Alert for a Mr. Allen Jefferis, an 84-year-old male of Union City, IN (Randolph County). It was reported to the Union City Police Department (Indiana) by family that Mr. Jefferis had gone missing sometime between the hours of 8 PM and 10 PM on 12/24/2021.
Between the hours of 10 PM (12/24/2021) until 9 AM (12/25/2021) the following morning, search efforts had not been able to locate Mr. Jefferis. At approximately 9:30 AM a member from the Union City command made contact with the Boone County Communications Center and requested the assistance of the BCSO bloodhound, Chase, and his handler Sgt. Ryan Musgrave. Sgt. Musgrave and Chase did not hesitate and responded to Randolph County, IN. Prior to Sgt. Musgrave’s departure he contacted another bloodhound handler, Deputy Neal Hoard with the Hamilton County Sheriff’s Office, and asked him if he would assist with the search with his bloodhound, Maudie. Deputy Hoard graciously responded to the scene as well to assist.
At approximately 12 PM, the bloodhound team arrived on-scene to assist with the search of Mr. Jefferis. Chase/Sgt. Musgrave and Maudie/Deputy Hoard got on a good scent in the backyard of Mr. Jefferis’s residence and tracked approximately ¼ mile in the area of an old barn. Members of the search party were approximately 100 yards ahead of the bloodhounds and as a result located Mr.
Jefferis laying on the ground in a wooded area, near a creek, clothed, wet, and most importantly alive. Mr. Jefferis was taken off-scene by medics to a nearby medical facility for treatment.

Sheriff Nielsen made the following statement:
“Christmas is a time that we spend with families celebrating together and remembering the real meaning of Christmas. There is no better way to celebrate Christmas than by coming together as a community with Law Enforcement to do a good deed. In this case, the grateful acts of so many saved the life of Mr. Jeffries. My understanding is that there were over 300-400 searchers over the course of
the time Mr. Jeffries went missing, this clearly shows how people still care in this sometimes hateful world we live in today. This K-9 bloodhound program is exactly why we began the program in 2018, to save lives. It clearly is a testimony of Sgt. Musgrave’s devotion to his job and Chase’s keen sense of smell.