Car Vs. Semi-Tractor Trailer Collision Results In A Fatality

You Are Here:Home>RadioMom Local News>Car Vs. Semi-Tractor Trailer Collision Results In A Fatality

Car Vs. Semi-Tractor Trailer Collision Results In A Fatality 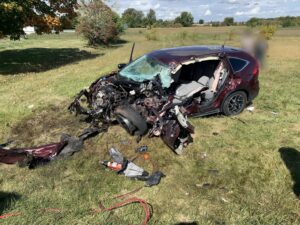 What is left of the car driven by Ms. Patricia Renick.

At approximately 1:20 PM Thursday, the Boone County Communications Center received a call for a vehicle collision between a passenger car and a semi-tractor trailer in the area of the 4600 block W SR 32 in Lebanon, IN. Upon law enforcement’s arrival, a passenger car was seen in the northside ditch of SR 32 and a semi-tractor trailer was found in the southside ditch of SR 32. Both vehicles were heavily damaged as a result of the accident. Witnesses to the accident were on-scene and advised law enforcement and fire personnel that the female driver of the passenger car was trapped within the vehicle. After further investigation it was found that the driver was the only occupant of this vehicle. Immediately fire personnel began working on freeing the driver. At approximately 2:40 PM, the St. Vincent Stat Flight medics pronounced Ms. Patricia Renick (71 yrs) of Crawfordsville, IN deceased. Ms. Renick sustained major life-threatening wounds as a result of this afternoons accident. Ms. Renick was headed westbound on SR 32 in a maroon Honda CRV and a Mr. Kevin Davis (31 yrs) of Greenville, SC, who was driving the semi-tractor trailer, was traveling eastbound on SR 32 when both vehicles collided. The cause of the accident is still under investigation.