You Are Here:Home>Obituaries>Carolyn Sue Patterson Duff 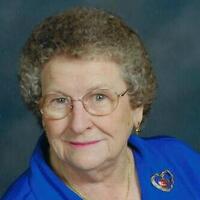 Carolyn Sue Patterson Duff, 86, of Lebanon, was called home Saturday, January 30. She lived at Homewood Health Campus in Lebanon since 2010 and most recently at Brownsburg Meadows. Born July 16, 1934 in the home of her parents, Cecil and Mary Patterson of Jamestown, Indiana.

Following graduation from Jackson Township High School in Jamestown in 1952, she worked at the State House Annex for the Highway Department until her marriage to the late Donald W. Duff on November 19, 1952.  They had one daughter, the late Charlotte Kay in 1958 who married Brian Kidd in August of 1979. They had two sons, Brandon of Chicago and Jared of Lebanon.

Carolyn became a member of the New Brunswick Church of Christ in 1952. She loved the many friends and relationships that were made in the church.  Her hobbies included playing the piano, camping, crocheting, jigsaw puzzles, word searches and playing cards. She was known for her “Special K cookies”. She was the secretary for the D.W. Duff Grain business for many years.

Preceded in death by her grandparents, Olive and Nancy Gardner Patterson and William A. (Bob) and Allie Burris Jones; her parents; daughter; brother Marion Patterson and infant sister, Janet Patterson in 1939.

Survivors include son-in-law, Brian Kidd of Lebanon; grandsons, Brandon and Jared Kidd and many nieces and nephews.

Family and friends will gather Thursday, February 4 from 10:00 a.m. until the time of service at 12:00 p.m. with Pastor Jason Jackson officiating in the Strawmyer and Drury Mortuary, 2400 N. Lebanon Street, Lebanon.  Mrs. Duff will be laid to rest in the Oak Hill Cemetery in Lebanon.  Memorial contributions in her memory may be made to the New Brunswick Church of Christ, 480 S SR 39, Lebanon, Indiana 46052.

The family would like to thank Crown Pointe for the good care Carolyn received. Also, Pastor Jason Jackson, elders and deacons who were so faithful in their visits.