I continue to be amazed how farming in Boone County Indiana can have so many twists and turns.

Maybe it is because the water standing in so many places left areas where it was easier to travel by following a crooked path rather than a straight line.

My city boy “thought process” envisioned an easy path from a single horse or mule to till the soil and cultivate the crop to the tractor and the combine. Have I ever been shocked!

Today I am thinking “Babe, the Blue Ox” and the Budweiser “Clydesdales” and you are thinking I have taken leave of my sanity…..

Consider this… it would take one man four hours and 45 minutes to produce one bushel of corn. That means in 2000 hours of work (the current standard work week x 50) one man could produce just over 421 bushels. Lots of work for so little benefit.

In the early 1800’s a crop was planted with minimum tillage. Corn was planted by poking a hole in the soil, dropping a seed or two, and moving to the next spot. Burning dead vegetation removed diseased plants and some insects and opened the ground for new planting. Scattering seed by hand, a very primitive method, was the prescribed method until a better way was developed. Consider adding a worker.

And then the plow was developed. 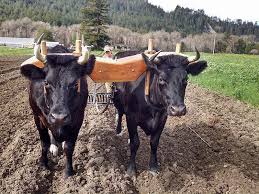 Ploughs were initially powered by humans, but the use of farm animals was considerably more efficient. The earliest animals worked were oxen. Later horses and mules were used in many areas. The first real inventor of the practical plow was Charles Newbold of Burlington County, New Jersey; he received a patent for a cast-iron plow in June of 1797. However, American farmers mistrusted the plow. They believed it “poisoned the soil” and fostered the growth of weeds. (Wikipedia) Paul Bunyon and his blue ox aside I believe that most of us think of these when we think of oxen.

Then I met… Jeff Jehn, trainer.

In search of a “real“ live ox I found Luke the Holstein OX stands over 6’ at his shoulder and stands on a firm footing.

While oxen often work with a bare hoof, shoeing one with a split shoe is done depending on the terrain being worked on.

Horses, on the other hand, when expected to work are provided with fitted shoes according to the work and breed of horse.

Both of the larger ones were fitted to Percheron– Prized by many as reliable for logging (clearing the swap), pulling plows, cultivators, wagons and other farm implements.

The need for greater production in the time allowed for work led to the invention of tools. That in time allowed for the expansion of the farm size from an average of 46 acres to farms exceeding several hundreds of acres.

But I get ahead of my story. Where do seeds come from?