You Are Here:Home>Obituaries>Charles E. “Chuck” Stevens 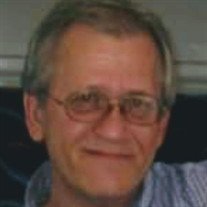 Chuck graduated from Thorntown High School, class of ’71, where he was a multi-sport athlete, excelling in football and track. He attended Indiana Business College in Indianapolis before enlisting in the US Army. Initially assigned to the National Security Agency in Maryland, he eventually made his way to Southeast Asia as security intelligence through the Army Security Agency from 1972-’75.

He was a part of the Teamsters Union for 38 years before retiring. He was a member of the American Legion in Thorntown and attended the Presbyterian Church in Thorntown.

Chuck was preceded in death by his parents, Lloyd and Marilyn (Gaddis) Stevens of Thorntown and brother, Kevin Stevens of California.

Chuck had a love for his family and friends. He enjoyed fishing in Michigan, a good game of poker and doing what he could to make memories that would last a lifetime. Anyone who knew him, knew his kind heart, his love for storytelling and reminiscing on one-of-a kind memories.

Please join us on Thursday, March 11, 2021 at 4:00 p.m. for funeral services with military rites at Myers Mortuary in Lebanon, Indiana so we can all share our stories about the time we had with Chuck. Services will be live streamed on the Myers Mortuary Facebook page for those not in attendance beginning at 4 p.m. on Thursday.
Visitation is planned from 2:00 p.m. to 4:00 p.m. on Thursday at the funeral home in Lebanon.

Attendees are asked to follow the CDC guidelines, to please wear masks and to maintain social distance.

Burial of ashes will be held at a later date in Maple Lawn Cemetery in Thorntown, Indiana. Boone County Crematory has been entrusted with his cremation.