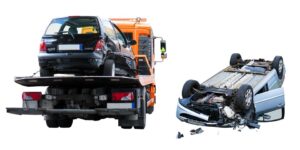 On Saturday, July 3rd, 2021, at approximately 11:39pm, Clinton County Central Dispatch received reports of a multi-vehicle crash, with entrapment and on fire on US421 at County Road 350S.
Preliminary reports indicate that vehicle one, a Silver 2020 Subaru, driven by Amanda Armstrong, 29, of Kokomo, was traveling southbound on US421. Armstrong crossed the center line and struck vehicle 2, who was already driving to the right of the roadway to avoid the collision. When attempting to correct its course of travel, vehicle 2  a Black 2013 GMC Yukon, driven by Garrett Fairclough, 39, of Frankfort and occupied by 5 people rolled over.
Armstrong continued left of center and struck vehicle 3, a Silver 2006 Chevrolet Trailblazer, driven by Jackie Burgin, 69, of Frankfort head on.  Burgin and passenger Shirley Burgin was a  front seat passenger. The Burgin vehicle caught fire as a result of the impact.
A passenger in the GMC Yukon was transported by EMS to an area hospital with non-life threatening injuries.
Amanda Armstrong was pronounced dead at the scene.
Husband and wife Jackie and Shirley Burgin, of Frankfort also were pronounced dead at the scene.