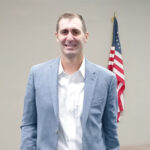 Commissioner Jordan Brewer in a file photo from July 25, 2020, after winning the Clinton County Republican caucus for District 3 County Commissioner to fill the vacant seat. (Photo by Brett W. Todd)

Brewer commented when introducing the ordinance, “it comes in light of, I would say, the documents we received over the summer referencing commissary payments that have continued on and so adopting an ordinance that basically states, without a contract no employee of Clinton County can be paid more than their salary ordinance shows.”

Attorney for Clinton County Thomas Little added, “unless there is a contract with you guys.”

Brewer explained further after the meeting the need for the new ordinance.

“So, obviously, in light of all of the litigation we still have pending, the Sheriff (Rich Kelly) turned over a commissary report – that he is required by statute – to [Clinton County] Council,” said Brewer. “Obviously, we got a copy of that this past summer as well and noticed payments were still being paid for management of commissary even though we do not have a contract.”

The reference to “litigation we still have pending” refers to the lawsuit filed by the Commissioners on March 19, 2021, – Brewer made the motion that the Commissioners should file suit – and was later joined by the Clinton County Council after its April 13 Council meeting at the request of county attorney Little, against Sheriff Kelly and Jail Matron and Commissary Manager Ashley Kelly in both their professional and personal capacities as well an Leonne LLC – an LLC owned by the Kelly’s that receives payment for commissary management. The Kelly’s are husband and wife.

The suit asks for an injunction to have either the Court or third party handle the commissary funds until an audit is completed by the Indiana State Board of Accounts. The Kelly’s insist they have done nothing wrong and a contract was presented to the county’s attorney, Thomas Little, in December 2018 and nothing was ever done by the county.

Brewer was asked how he would respond if people thought the new ordinance singled out Sheriff Kelly and Jail Matron and Commissary Manager Kelly.

“This is the only fund outside of the county (account’s) that would really have a contract that’s managed that way. So, there’s really no other instance that it would be applicable to, but it would be applicable to any employee whether it was another county employee that worked in ‘x’ office and was hired to run the commissary, they would have to follow the same ordinance as well with a contract.”

The Kelly’s react to the new ordinance.

“Blindsided,” replied Jail Matron and Commissary Manager Kelly when asked for a reply to the news of the special meeting and the action taken. RadioMom was first to inform the Kelly’s of the action taken by the Commissioners upon their arrival at the Courthouse for budget discussions with the Clinton County Council on Wednesday morning.

Later while discussing the sheriff’s budget, specifically the line item regarding legal fees, both Sheriff Kelly and Matron Kelly spoke of the actions of earlier that morning to members of the County Council.

While holding a copy of the new ordinance, Matron Kelly stated, “This is ticking me off.” Sheriff Kelly added, “It’s a dog and pony show – a bit over the top.”

Matron Kelly continued, “This is ridiculous. We are being made out to be liars and thieves. We have been sitting on a contract and conflict form for months.”

“In the county attorney’s own words, ‘I got it – it will be taken care of’,” Sheriff Kelly informed the Council. “In December 2018 , that conversation happened. It is the same thing as (previous sheriff) Jeff Ward’s – 50/50 – that Sheriff (Mike) Hensley started. It is the same compensation. It is the same everything. Yes, is there an LLC? Absolutely. I don’t know anybody that does business that doesn’t have an LLC. You give me the contract, we fill in the blanks – you put it through a public meeting and on we go, that’s the business at hand. It is something the county should have taken care of, but never did.”

According to the Kelly’s, they turned over a copy of the signed contract used by Nancy Ward – the previous commissary manager – to their attorney to be used as a template. “We kept it at 50/50 like every predecessor before me has received,” noted Matron Kelly. “We delivered that and they have done nothing with it.”

And, Sheriff Kelly added, “That original from Nancy was written by Tom Little.”

Councilman Jeff Chynoweth and Jake Myers spoke of the positives in light of the ongoing litigation at the end of the budget hearing.

“What I have been telling everybody, there have been a lot of great things come out of the Sheriff’s Office in the past three years that otherwise hadn’t happened or wasn’t going to happen if wasn’t for your guys’ vision and foresight,” remarked councilman Myers. “I look at this from a law enforcement perspective, because I worked in the jail under Mike (Hensley) in ‘97-’98 and to see where it has come from since then and still in that same building. I see the moral of the road guys is so much higher than it had been in the past. You guys keep on, keeping on what you are doing.”

“I think it was timely that we needed to talk to you because of the budget,” said councilman Chynoweth. “I am proud of the council and you two. Somebody needed to start talking to you. The communication that has happened today can only be helpful.”

The next court date is set for Thursday, September 30 in Lafayette. Tippecanoe County Judge Sean Persin ordered all sides to have participated in a settlement conference/mediation in hopes of resolving this matter outside the courtroom prior to this upcoming hearing.

Little stated no such conference/mediation has taken place at this time. “We’re trying to figure out right now who that mediator is going to be. We’re working on trying to get a Senior Judge currently to do it. We just haven’t been able to find one that has availability to help us. But, we are working hard to get number one, that person selected and then two, the date in which we are going to have the settlement conference or the mediation.” 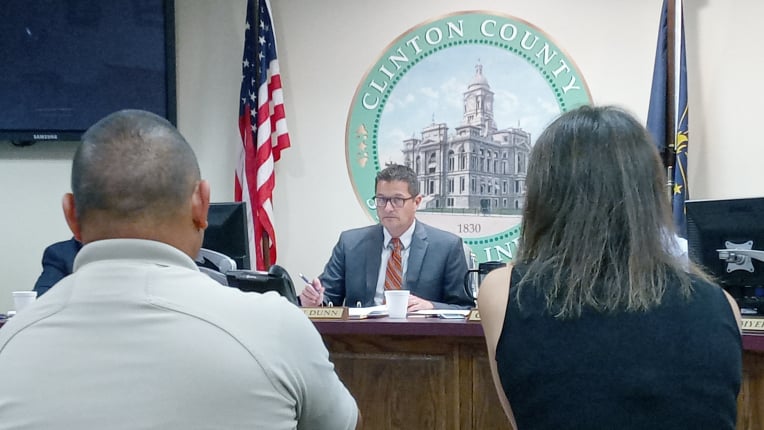