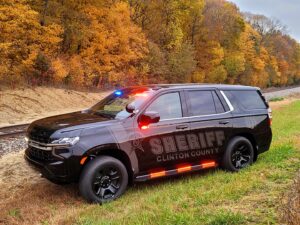 On June 19, at approximately 3:54 p.m., Deputies from the Clinton County Sheriff’s Office responded to a report of a vehicle inverted in Bush Creek in the area of County Road 650 S and County Road 300 W.
A preliminary investigation revealed that  a Blue 2016 Subaru WRX, was traveling southbound on Interstate 65, near the 150mm. For an unknown reason, the vehicle left the roadway, entering the median where it went airborne for approximately 75 feet. The vehicle overturned and came to rest inverted in a creek between the northbound and southbound lanes, underneath the interstate.
The driver, identified as Cedric Michalke, 28, of Lebanon, was the sole occupant of the vehicle. Michalke was pronounced deceased at the scene by the Clinton County Coroner’s Office. His family has been notified.