FRANKFORT, Ind. – “From fires inside the facility to contraband to damage to vandalism – one of our officers received several stitches because of an assault,” said Clinton County Sheriff Rich Kelly when asked about the totality of an unlawful order as ruled by Parke County Special Judge Samuel Swaim that the Commissioners had “exceeded its authority and is therefore unenforceable as to the Sheriff’s sale of nicotine products to inmates in the Clinton County Jail through Commissary.”

Sheriff Kelly brought suit against the three-member Board after they revised in March 2021 an existing county ordinance from 2012 – which prohibits smoking “in all county offices and places of employment” – to also include “any type of smokeless tobacco or its synthetic equivalent and the like … in all county offices, places of employment, buildings and vehicles.” The Board further stated in Order No. 2021-05 that the Jail is a County building and the selling of nicotine products to inmates through Commissary must stop.

“This was information provided to the Commissioners during the process of enacting this ordinance,” continued Sheriff Kelly. “When that was put into place, it put everyone of my people in here in danger and the other inmates as well. Our jail staff has done a fantastic job of providing a report to Parke County showing that assaults on our jail staff has gone up almost 100-percent since they instituted this ordinance.”

The report mentioned by the Sheriff is a sworn affidavit by Jail Commander Natasha Douglass filed with the court.

Sheriff Kelly described the restart of the sale of e-cigarettes and nicotine pouches as a “process.”

“I am thankful we are able to bring them back. We are going to start the process of getting them back on the menu for the inmates who are up here. It’s just something that can’t happen overnight.”

The Sheriff emphasized the sale to and the use of e-cigarettes and nicotine pouches to Jail inmates is a behavioral tool.

“It took away our ability to control some behavior and provide these folks a little peace of mind for the men and women inside this facility.”

Douglass provided in an additional affidavit how having e-cigarettes and nicotine pouches available impacts the jail population, “When we have an inmate come back from getting a lengthy sentence at court, receiving bad news on a phone call or visitation, or receiving a death notification via our Chaplain services, emotions can run high and the e-cigarettes provide a safe outlet for inmate anxiety and stress. The threat of inmates losing the privilege of using these tobacco substitutes has also proven to be a strong behavior modification tool. Inmates who have lost the ability to use these products have frequently changed their behavior in order to regain that privilege. In sum, the inmate population is easier to manage with these products available.”

Sheriff Kelly was asked about legal costs and said it is too early to know all of the costs involved.

“We don’t know what their actions are going to be tomorrow or today. What they’re filing today. What attack is it going to be on the Sheriff next. It’s tiresome, but believe me – I will stand my ground.”

“I campaigned on cooperation without compromise and that’s where I stand. I am elected by the community, for the community and that is my obligation to do the best that I can.”

The separate lawsuit brought by the Commissioners and later joined by the County Council against Sheriff Kelly, Matron Kelly, and Leonne LLC requesting an injunction to have either the Court or third party handle the commissary funds until an audit is completed by the Indiana State Board of Accounts is still active in Tippecanoe County.

Attempts were made to contact Commissioners President Josh Uitts for this article. Uitts first replied on October 12 that a press release would be issued the morning of October 13. After not receiving a press release or any additional reply, Uitts was contacted again on October 15 with no reply returned at this time of this publication. 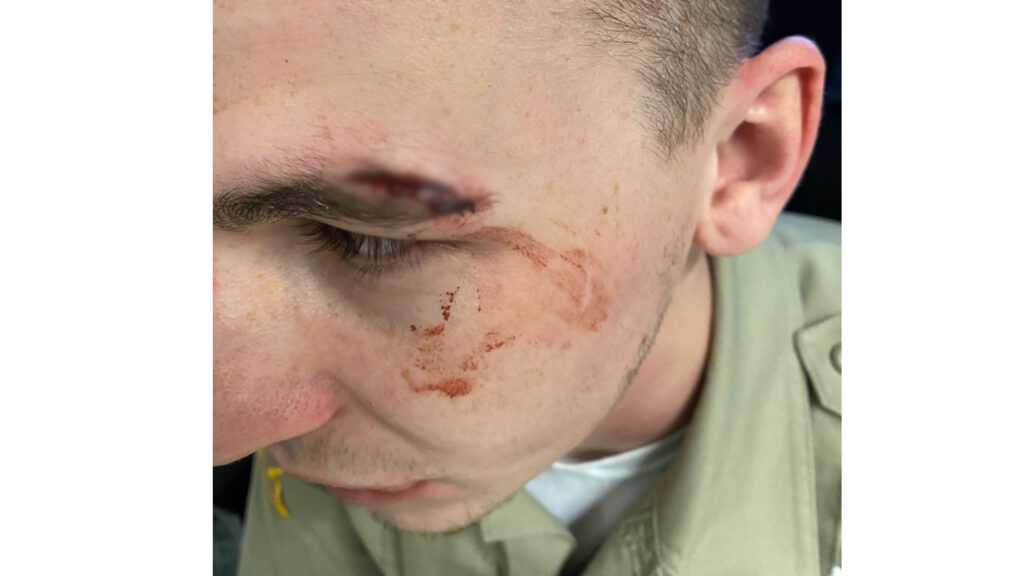 A Clinton County Corrections Officer shown having been injured in an altercation with an inmate over the lack of access to e-cigarettes and nicotine pouches according to court documents. Note: the cut above the eye has been blurred by Brett W. Todd for RadioMom due to some readers may find the original image disturbing. (Photo from case 54D01-2103-PL-000257, Exhibit 4 -filed 10/12/21.)