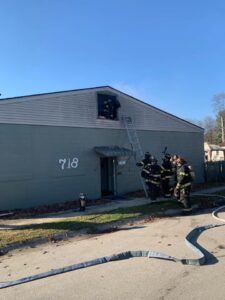 At approximately 2:16 p.m. Friday, Lebanon Fire was dispatched to 718 Garfield Street for a report of a fire in the ceiling. The building was occupied by staff who first saw the glow in the ceiling and called 911. Command marked on the scene and advised there was light smoke showing from the front of the building. Fire crews made entry to the attic to locate the fire. A small fire was found and quickly extinguished. After investigation, the fire was determined to be unintentional and electrical in nature. There were no injuries reported.