You Are Here:Home>RadioMom Local News>Council Hears Details On New Neighborhood 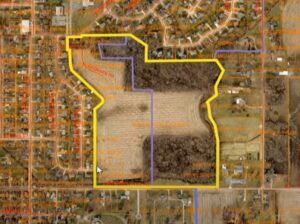 A map showing where the proposed Cedar Ridge subdivision would be built.

The Lebanon City Council heard an ordinance for a planned unit development or PUD rezoning on first reading at Monday’s meeting. Cedar Ridge will develop 58 acres east of the Edgewood neighborhood on Washington Street. The PUD varies from the single family home zoning in the city’s uniform design standards. The developer is asking for approval of the modified plans. City Planner Ben Bontrager told the council the land has significant challenges because it is bordered by a creek on two sides and only 30 acres or 52% of the property can be developed outside of the flood plain. More details in the Lebanon Reporter.