You Are Here:Home>Obituaries>Dolores Ann Malicoat 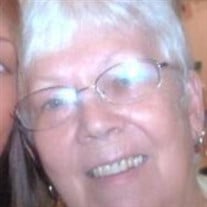 Dolores Ann Malicoat, 81, passed away peacefully at her home in Coatesville, Indiana, on Sunday, July 18, 2021. She was born in Lebanon, Indiana, on July 1, 1940, a daughter of the late Gene and Mary K. (VanSickle) Lewis.

On January 13, 1984, she was married to Richard E. Malicoat in Martinsville, Indiana; he survives.

She was a 1958 graduate of North Salem High School. She had worked for American States Insurance for many years, retiring in 1982. Dolores then worked part-time at Fundex Toy Company in Plainfield for about 10 years.

Dolores was a devoted wife, mother, grandmother, and great grandmother who loved her family dearly.

In addition to her parents, Dolores was preceded in death by a son, John Malicoat, and a brother-in-law, Dwayne Brewer.

Visitation is planned from 4:00 to 8:00 p.m. on Thursday, July 22, 2021, at Porter and Hunt Funeral Home & Crematory, 6 South California Street, in North Salem, Indiana. Funeral services will be held at 11:00 a.m. on Friday, July 23, 2021, at the funeral home in North Salem.
Interment will follow at Fairview Cemetery in North Salem.