You Are Here:Home>Obituaries>Donnie E. Gleb 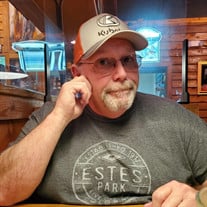 Donnie joined the Lord and his family in heaven during the early hours of Thursday, August 12, 2021. Complications from COVID took his last breath.
He was the loving, loyal husband of 27 years to Minnie; proud father to Dustin (Amber) Gleb and Nicole (Todd) Mader; adoring grandfather to Jalynn, Carter, Brody and Owen; and delighted “Happe” to Orlando, Isaiah, Diego, and Aurora.

Don was proceeded in death by his parents and best friends, Forrest and Ramona (Ross) Gleb; his brother, Michael Arthur Gleb; and his sister Linda Ann Adams. He is survived by his wife, children, grandchildren, numerous nieces, nephews and great nieces and a great nephew.

A graduate of Lebanon High School, class of 1978, he was a bit of a pistol during his school years. Let it be known that as he met his teachers in later years, they forgave him for his antics and expressed pride in the man he had become; sometimes offering awards or sympathy to Minnie for marrying him.

Don first worked for his father and later purchased Gleb’s Dairy, building the family business successfully through his sales skills and caring personality. He told stories of many breakfasts and treats waiting for him when delivering milk to institutions and schools.

His smile, the twinkle in his eye, his love of storytelling, humor and laughter netted him many customers and friends throughout his career with the Boone County Sheriff’s Office, Bill Estes Chevrolet in Indianapolis, Wonder Bread; and finally Pilot Company, where he fulfilled his dream to drive a truck. He opened Don’s Lawn Care, selling it only to take care of Minnie during her health care crisis. Donnie ALWAYS put the care and well-being of his family first. His work ethic was unmatched, he never hesitated to work multiple jobs or long hours to meet their physical needs. Under all of his laughter was a wise and kind man who cared deeply for his friends. Willing to help anyone at any opportunity that came his way.

His service to the Lord included teaching Sunday School and nursing home ministries with Lighthouse Baptist Church, Lebanon. His hobbies included fishing, gardening, and laying down perfect lines as he mowed the lawn. We’ll love you forever. P.S. Everybody loves Tankie!

Visitation will be on Tuesday, from 3:30 p.m. until the time of service at the funeral home in Lebanon.