You Are Here:Home>Obituaries>Dorothy Jean “Jeanie” Meenach 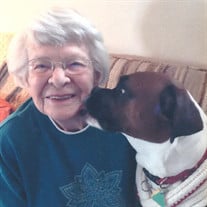 Mrs. Dorothy Jean “Jeanie” Meenach, 95, passed away peacefully on February 1, 2022 surrounded by family and friends at her daughter’s home. She was a lifelong resident of Boone County. Growing up as a country girl; she was born in Lebanon, Indiana on February 19, 1926; a daughter of the late Glenn and Mildred (Ek) Peabody.

She was a 1944 graduate of Pinnell High School and attended Methodist Hospital School of Nursing.

On April 4, 1946, she married the love of her life, Wendell O. “Wendy” Meenach at the Old Union Church. They celebrated 50 years of marriage in April of 1996 before his passing in July of 1996. Jeanie was a homemaker until her daughter went to school. After that, she worked at Boone Mutual Agency, Armstrong Otterman and the Lebanon Reporter.

She was an avid reader, loved her flowers, going to BINGO with her daughter and traveling to casinos with her daughter, son-in-law, and granddaughter. She always enjoyed spending time with her good friends, playing cards and bowling. Jeanie was even a member of the Lebanon Bowling Hall of Fame. She was also a member of the VFW Auxiliary in Lebanon. Jeanie was an avid IU fan, especially watching their basketball team. Traveling to Arizona and Las Vegas during the winter months with her husband was something they always looked forward to. In addition to the love she had for her family, she also adored and doted over her daughter’s dog, Millie.

A special thanks to Paradigm Health and Hospice, especially Danielle, Vanessa and LeeAnn; who were there at all times when needed. Another special thanks to Laurie Reynolds for being a wonderful caregiver. Jeanie loved them all.

A Celebration of Life will be held at a later date with burial of ashes at Old Union Cemetery.

Memorials: In lieu of flowers, Jeanie’s request was for memorials to assist her daughter with the help of chemo medication, which is quite expensive in treating her cancer of Myelofibrosis. A fund will be set-up at a later date through Key Bank, 127 West Main Street, in Lebanon for Joanell “Joni” Ping.

Myers Mortuary and Boone County Crematory in Lebanon has been entrusted with her care.