You Are Here:Home>Obituaries>Dustin Lee White 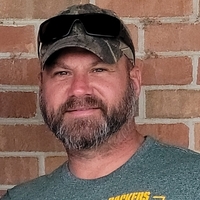 Dustin Lee White, 43, of Romney, tragically passed away as a victim of a car accident on his way to work, Friday, October 22, 2021, in Tippecanoe County. Dustin was born April 13, 1978, in Martinsville, IN, son of Dan and Sharon White of Lebanon, IN.

Dustin graduated from Lebanon High School in 1996. Dustin was a big contributor to the Lebanon High School Athletics, playing Baseball, Basketball, and Football. After high school, Dustin attended the University of Southern Indiana and was a player on the rugby team.  He was an avid sports fan and loved his Michigan Wolverines and Green Bay Packers. His other hobbies included being outdoors, hunting, fishing and shooting guns with his children.

After high school, Dustin soon found a passion for welding and fabricating. He fine-tuned his craft working 11 years at Altec.  Dustin seized the opportunity to join a new venture with Timpte, Inc. in 2019. He quickly proved to be a leader and was promoted to Shop Foreman. Dustin had an eye for detail and was very prideful on only putting out quality work.

Dustin was a devoted father and husband and a true family man. He enjoyed raising and loving his sons Dawson and Damon White.  In 2014, Dustin was blessed with 3 more children Aubree, Mason, & Gryffin when he met his wife, Kara. In spring of this year, Dustin and his family were able to purchase their dream home in the quiet country town of Romney. He had his land, woods, and barn where he could peacefully enjoy his hobbies with his loved ones. He loved his family with every fiber of his being.

Family and friends will gather Sunday, Oct. 31, for visitation from 12 p.m. until the time of the funeral service at 4 p.m. in the Strawmyer & Drury Mortuary, 2400 N. Lebanon Street, Lebanon.  Dustin enjoyed his comfortable clothes. In honor of him, we ask that you dress comfortably in your favorite blue jeans and shirt.