You Are Here:Home>Obituaries>Edwin Eugene Endres 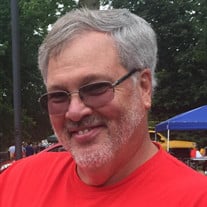 Mr. Edwin Eugene Endres, 66, passed away unexpectedly on Tuesday, July 26, 2022, at his home in Lebanon, Indiana. He was born in Lebanon, Indiana on June 15, 1956, the son of the late Harry W. Endres and Mary Louise (Wallace) Endres Bourne.

As a child he attended St. Joseph Roman Catholic Church. On December 14, 1975, he was united in marriage to Susan D. (Wethington) Endres at Centenary United Methodist Church in Lebanon, Indiana; she survives.

Ed was a 1974 graduate of Lebanon High School. He was a lineman with Boone County REMC for a number of years and later worked for MillerEads Company in Indianapolis for over 30 years as an industrial and commercial high voltage electrician. Ed was a member of IBEW 481 in Indianapolis where he served as an instructor for the apprenticeship program for several years.

He loved his family deeply and enjoyed traveling, farming, taking care of his land and tinkering in the barn, gardening and creating spreadsheets.

In addition to his parents, Ed was preceded in death by his stepfather, Bruce R. Bourne and brother-in-law, Denny Duke.

Graveside Memorial Services will be held at 11:00 a.m. on Wednesday, August 3, 2022, at Oak Hill Cemetery, 935 East Washington Street, in Lebanon, Indiana. Myers Mortuary and Boone County Crematory in Lebanon, Indiana has been entrusted with his arrangements.