You Are Here:Home>Obituaries>Edwin Lee Strong 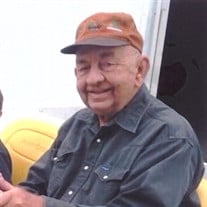 Edwin Lee Strong passed away at Signature Healthcare at Parkwood in Lebanon on Thursday, August 19, 2021 at the age of 81. He was born July 30, 1940 in Marion County, Indiana, a son of the late Russell and Louise (Haston) Strong.

He was a graduate of Jackson High School in Clinton County and on February 19, 1960 he married Sharon Ann (Duff) Strong; she survives.

Ed had a love for the land and farmed his entire life; raising hogs and farming corn, wheat and beans. He worked at the Sugar Creek Elevator in Thorntown and served on the FHA Board in Boone County from 1968 to 1971. Ed was recognized as an FFA honorary state farmer in 1986 and honored by the Feeders and Breeders in 2013. Ed retired from farming in 2008 and continued to rent out his farm.

Visitation will be held from 10:00 a.m. until the time of service on Monday at the funeral home in Lebanon. Interment will follow at Bunnell Cemetery in Frankfort.

Memorial contributions may be made in his memory to the charity of the donor’s choice.