You Are Here:Home>Obituaries>Elnora Ruth Alma 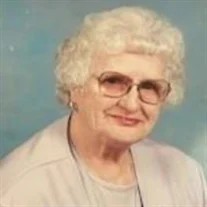 Mrs. Elnora Ruth Alma, 94, passed away at the Waters of Lebanon on Sunday, October 25, 2020. She was born in Boone County, Indiana on November 27, 1925; a daughter of the late Melvin Cleo and Merlia L. (Jackson) Baumgardner.

During her childhood years, she lived near Zionsville and was a graduate of Carmel High School.

Elnora was married a short time to Richard Kinkead, they divorced, and he preceded her in death. On August 29, 1957 she married Roy E. Alma; they shared 32 loving years together before his passing on September 16, 1989.

Elnora and Roy lived and farmed near Waynetown, Indiana before moving back to Lebanon in 1990. She worked for J & L Steel (bucket factory) for ten years and also worked a few years at the Lebanon Kroger, retiring in 1993.

She was a member of the Bible Baptist Church in Lebanon. She enjoyed working on the family farm and word search puzzles, but nothing was more important to her than family.

Funeral Services will be held at 2:00 p.m. on Wednesday at the funeral home in Lebanon.
Interment will follow services at Oak Hill Cemetery in Lebanon, Indiana.

Memorials may be made in her memory to the charity of the donor’s choice.