You Are Here:Home>Obituaries>Ethel C. Price 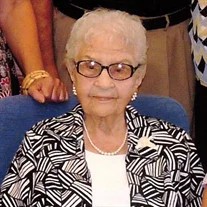 Mrs. Ethel C. Price, 108, formerly of Thorntown, passed away at IU West Hospital in Avon, Indiana on Wednesday, December 2, 2020. She was born in Colfax, Indiana on September 2, 1912; a daughter of the late Wallace and Georgia (Mollier) Cook.

She was a graduate of Bowers High School in Clinton County. On September 2, 1934 she was married to Jack Price; they shared 60 loving years together before his passing on August 12, 1995.

Ethel was the bookkeeper of Gatewood and Price Hardware Store, in which she and her husband owned from 1959-1966. She later was employed with Home National Bank in Thorntown for many years.

She was a member of the Thorntown United Methodist Church. Ethel enjoyed working in her flower garden and spending the winters in Texas, but nothing was more important to her than family.

In addition to her parents and husband, Ethel was preceded in death by a son-in-law, John Hovermale.

Private Family Graveside Services will be held on Saturday, December 5 at Plainview Cemetery in Colfax, Indiana.