You Are Here:Home>RadioMom Local News>Fire At Lebanon Fuel Station Injures One 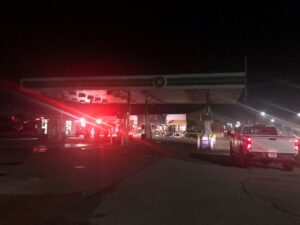 On the morning of October 13th, 2021 at approximately 1:57 AM Lebanon Fire Department was dispatched to 1902 Indianapolis Ave. in Lebanon on report of a commercial building fire. Lebanon Firecrews arrived on scene at 2:01 AM with an ambulance from Boone County EMS. The ambulance crew was directed by law enforcement to a patient identified as an employee of the fuel station, suffering
from burns. The patient was immediately treated and transported emergent to Sidney & Lois Eskenazi Hospital for treatment. Lebanon Fire crews reported fire on the exterior of the main structure with propane tanks burning in the parking lot upon their arrival. Crews made an aggressive attack on the fireand it was marked under control by command at 2:10 AM. Overhaul efforts were performed byLebanon and Whitestown Fire crews to ensure the fire was out.
Lebanon Fire Department investigators were called to the scene to conduct an origin and cause investigation, which is underway. Due to initial observations and statements, it is believed that the fire originated near a propane tank storage cage near the main structure. Interviews, video surveillance on site, and the scene examination have yet to be completed at this time. Once investigators have
completed their investigation, additional information will be released.
The fuel station will remain closed at this time due to damage to portions of the electrical system and the interior of the structure, and pending approval from the Boone County Health Department due to food and drink machines in the structure that were exposed to smoke and heat.
Assisting agencies for this event were Whitestown Fire Department, Boone County EMS, Lebanon Police Department, Boone County Sheriff’s Office, Boone County Communications, and the Boone County Health Department