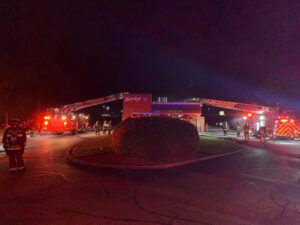 Tuesday morning at 5:28 A.M. Lebanon Fire Department was dispatched to Wendy’s at 1362 South Lebanon Street for a commercial building fire. Battalion 201, L213, E212, L271, L272, L293 and M11 were on the initial dispatch. Battalion 201 arrived on the scene, established command and advised there was smoke showing. This was marked a working fire after the fire was visible through the windows and an additional apparatus was started. Initial fire crews made entry to the building and discovered the fire was contained to the fryers. The fire was quickly extinguished by crews. The roof of the building was checked to make sure no fire was visible in the exhaust system. The fire was called in by an employee that was working getting ready for the morning shift. The Boone County Health Department was contacted. No injuries were reported by employees or fire crews.