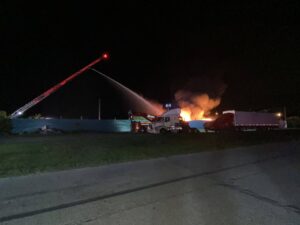 On Wednesday, September 22nd at approximately 8:47 PM Lebanon Fire and Center Township Fire crews were dispatched to Zores Towing (2115 Frontage Rd) on report of a building fire. While approaching the scene crews identified a large fire in the salvage yard at the property but were able to quickly confirm no structures were involved. Upon arrival crews initiated defensive operations to keep the fire from spreading to additional areas of the salvage yard and confirmed scrap vehicles as the only fire load at that time. Due to the size of the fire and the area being unhydrated, tanker shuttle operations were initiated, and additional apparatus was requested to assist from surrounding departments. After the fire was brought under control excavators were used to separate the vehicle piles and assisting agencies applied foam to the vehicles utilizing specialized ARFF apparatus. The fire was marked out at 11:14 PM. The Boone County
Health Department and Boone County Emergency Management responded to the scene to monitor for potential hazards in the water runoff. At this time there is no estimate of the monetary damage the fire caused.