You Are Here:Home>RadioMom Local News>Fire Damages Home On Lebanon’s Southeast Side 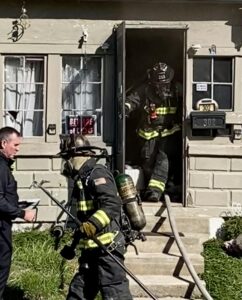 At approximately 11:09 Monday morning firefighters were called to 302 E. Elm Street, Lebanon on a reported house fire. Lebanon Fire units arrived on scene to find smoke showing from the front of the building. Upon arrival, firefighters were informed one resident was unaccounted for. Fire crews performed interior fire attack while simultaneously searching for potential fire victims. The first due fire crew entered the building and had water on the fire within 2 minutes of arrival. The fire was brought under control, searches were complete, and firefighters determined no occupants were present in the building within 6 minutes. No civilians or firefighters were injured during the fire, but unfortunately two pets perished.

Upon completion of fire suppression and search activities, Lebanon Fire Investigators took control of the scene to determine origin and cause. After careful scene documentation and examination, investigators determined the fire originated in the home’s living room and the cause was accidental in nature. All fire apparatus cleared the scene at 1:30 pm.