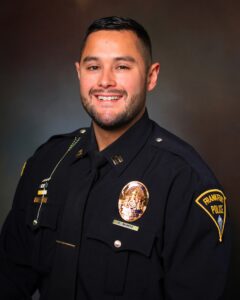 With the retirement of Frankfort Deputy Chief Jim Skinner effective on July 31,2022, Mayor Judith Sheets will promote Captain Cesar Muñoz to become the next Deputy Chief of Police. Captain Muñoz has been a member of the Frankfort Police Department since 2012. He was promoted to Captain by Chief Scott Shoemaker in July 2020. According to Mayor Sheets, “Captain Muñoz comes highly recommended by Chief Shoemaker and Deputy Chief Skinner as well as officers at FPD. He has been a very effective leader.” Indiana State law provides that a Deputy Chief of Police in a class three city be appointed by the mayor. The appointment is effective August 1, 2022.