FRANKFORT, Ind. – The City of Frankfort moved forward with its plans to build both a new police station and aquatic center at a cost not to exceed $18.5 million at the Board of Public Safety and Works meeting Monday evening in the council chamber of Old Stoney after previous attempts to move both projects along failed due to high construction bids received.

The 13-to-14-page document unanimously approved by the three BOW members addresses the previous failed attempts by using a 20-plus-year-old Indiana law allowing city and county governments to utilize an alternative procurement method to deliver a public project by way of a public-private partnership. The alternative procurement method is called BOT, an acronym for build, operate, transfer, and allows a government body to have greater control over the upfront cost and allows for negotiating costs while not having to reject bids and starting the process over. The latter being the traditional way of doing a government project.

BOT also allows for combining multiple projects into a single, larger project with the desired outcome of lowering costs by developers bidding to do both projects.

“We’re moving forward,” said Mayor Judy Sheets. “It has been a process and I think we are getting there. I think it is a very good way for the city to go.”

The action taken by the BOW calls for the issuance of a request for proposals and qualifications with developers responding by October 15th. The BOW has created an evaluation committee to perform the work of identifying qualified proposals and negotiating with those developers from October 16 through 29. Once the evaluation committee has made a decision, they will inform the BOW who will in-turn execute the contracts with all project funding subject to approval from the Frankfort City Council.

Mayor Sheets spoke of how she sees the evaluation committee working.

“I think the committee will probably move quickly as we go through the process because we’re all ready to break ground on the aquatic center and police station. I think it is going to be a great process for us.”

Plans call for the $8.5 million police station to be built on recently purchased land on Indiana 28 West on the east side of Brock Grain Systems while the $10 million aquatic center will be located on land where the current pool sits at the T.P.A. park.

In regards to the overall cost of the project Mayor Sheets stated the price tag is the best the city can do at this time in light of Covid having an impact on costs of material and labor.

“I think it’s probably the best we can do right now with the cost of things. And of course, as everybody knows, Covid had an effect on the cost – it is unfortunate but I think if we are going to move forward we are going to have to work with those figures.” 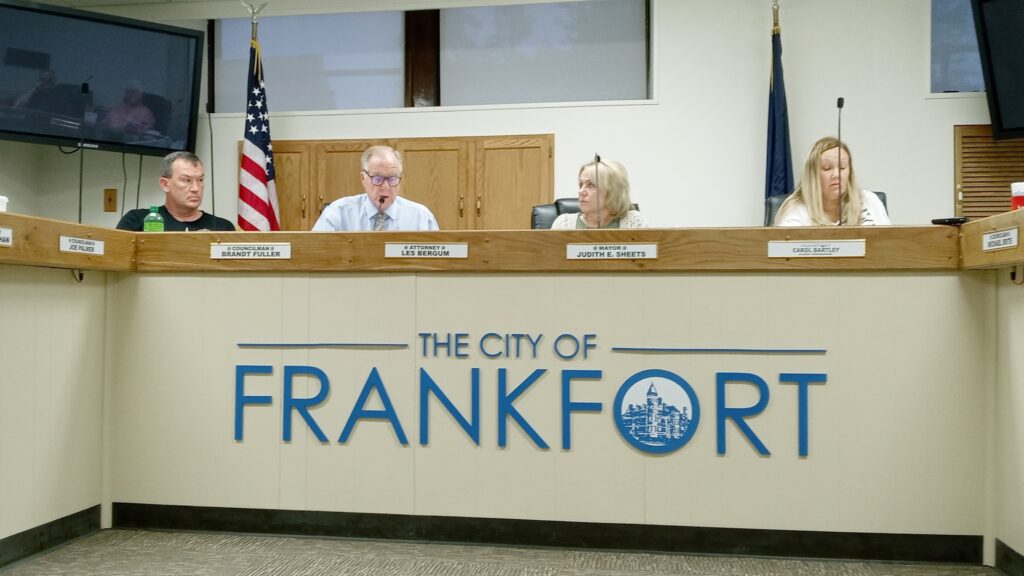 Frankfort City attorney Les Bergum, second from left, addresses members of the Frankfort City Council on Monday, September 13, 2021, on the action taken by the Board of Public Safety & Works regarding the unanimous action taken by the BOW to seek requests for proposals and qualifications to build two projects totaling $18.5 million; the construction of a new police station and aquatic center. (Photo by Brett W. Todd)