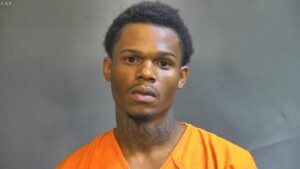 On July 15, 2022, at 7:35 PM, Lebanon Police Officers were dispatched to the local Kroger on the report of a wanted subject out of Clinton County being at that location. LPD Officers were told that an off-duty Frankfort Police Officer spotted the wanted subject,
Torrance Edwards 19 of Frankfort, IN, at the Kroger. LPD Officers arrived on the scene and were told that Mr. Edwards fled the area heading north. After a foot pursuit, responding officers from multiple agencies within the county surrounded the area where Mr. Edwards was believed to be. With help from witnesses in the area, Mr. Edwards was located and taken into custody in
the 600 block of Syracuse Drive.
Mr. Edwards was taken to Boone County Jail on the felony warrant out of Clinton County and the preliminary charges of resisting law enforcement, residential entry, and possession of marijuana. Lebanon Police Department was assisted by multiple agencies including Boone County Sherrif’s Office, Whitestown Metropolitan Police Department, Zionsville Police Department, Thorntown Police Department, and Frankfort Police Department.