You Are Here:Home>Obituaries>Frederick Wright Haney 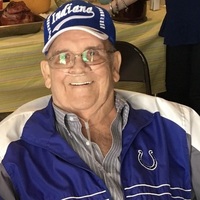 Heaven became a bit more lively when the gates opened up and 220 pounds of rompin,’ stompin,’ hell, death and destruction (otherwise known as Fred Haney) joined the party.

Fredrick Wright Haney was born Nov 2, 1938 at home in Beech Grove, IN to Jack and Mertyl Haney.  After losing both parents as a young boy, he (along with his brothers) was sent to Milledgeville to live the rest of his childhood attending Pinnell.  He was a 1956 Lizton High School graduate and in 1957 began his career with the GM Truck and Bus Division where he was Superintendent of Master Mechanics, retiring in 1992.

Fred spent the next 30 years of retirement golfing, riding his golf cart around town, sitting with friends at various local taverns, attending his grandchildren’s events and wintering in Florida.

In 1957 he was married to Lois Fine and later to Judy Hysong.  His most recent companion was Wilma Mantooth who shared his home and helped care for him.

He was a member of the Moose, Sons of the American Legion and the Lebanon Eagles.

Fred will be sadly missed by his son and best friend, Jeff (June) Haney of Thorntown and Cathy (Gary) Smock of Mesa, AZ.

He was a Pap or Papaw to Bradley Smock of Lafayette, Travis Smock (Lori) of Indianapolis, Tyler (Keri Jeffers) Haney of Lafayette, Colin (Kelsey) Haney of Lebanon and Emma (Sawyer) Donovan of Clayton.

He was preceded in death by his parents, along with brothers, Don and Bill Haney and half- brother, Jack.

Friends and family will gather at Strawmyer Drury Mortuary, 2400 N. Lebanon Street, Lebanon on Saturday, Dec 11 from 9-11am with services immediately following.