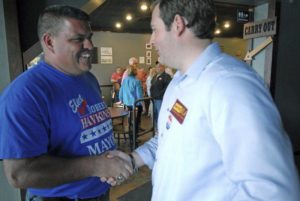 Lebanon Mayor Matthew Gentry won the Republican nod to seek re-election as mayor in November. Gentry had slightly fewer than half the votes at 1,233, while Debbie Ottinger had 805 and Rob Hawkins had 549 when all were counted by 7 p.m. Tuesday. More details in the Lebanon Reporter.