You Are Here:Home>Obituaries>George William “Bill” Luttrell 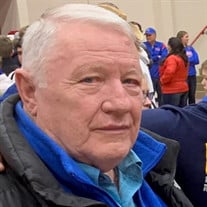 George William “Bill” Luttrell, 77, of Lebanon, Indiana, passed away on November 30, 2021 at St. Vincent Hospital in Indianapolis, Indiana. He was born February 11, 1944, in Combs, Kentucky; a son of the late George Lafayette and Edna (Gabbard) Luttrell

Raised in Combs, Kentucky, George was a graduate of M.C. Napier High School in Hazard, Kentucky. He proudly served his country in the U.S. Army. Following the Army, he served in the Indiana National Guards.

George retired after 40 years of dedicated service with United Technologies Carrier. He previously attended Grace Baptist Church in Lebanon for many years.

He was a diehard UK basketball fan, enjoyed watching NASCAR. a fan of fast cars and enjoyed attending car shows. George was a kind, hardworking man who was devoted to his family. His grandkids were everything to him, and he never missed one of their sporting events.

In addition to his parents and wife, George was preceded in death by a brother, Dickey Luttrell.