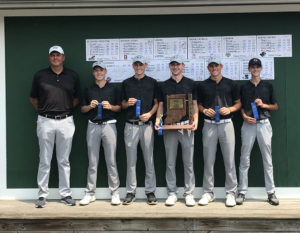 The Zionsville golf team knew it would have to be on top of its game if they were going to make it out of the sectional Monday afternoon. But even the Eagles probably wouldn’t have predicted what happened over the 18 holes at Ulen Country Club. The sixth-ranked Eagles shot a 299 to win the title against the loaded field that featured five teams ranked in the top-13 and four in the top-6. No. 1 Carmel was second with a 301, and No. 2 Guerin Catholic shot a 302. No. 5 Brebeuf Jesuit shot a 306 and did not advance. Collin Nasser led the team with a 74. Lebanon placed seventh with a 352.Toby Meyer led the Tigers with a 77 on the day.  Western Boone finished eighth with a 396. Luke Marsh led the Stars with a 92.