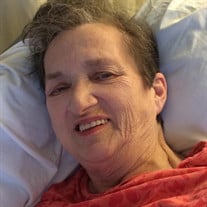 Grace Rebecca Lowery, 79, passed away on Friday, September 17, 2021, at Homewood Health Campus in Lebanon, Indiana. She was born March 29, 1942, in East Berlin, Pennsylvania, a daughter of the late Melvin Andrew and Margaret Irene (Burgard) Trostle.

In 1960, she was married to Glenn Shutt and later married Wesley “Bud” Lowery.

Grace was a 1960 graduate of East Berlin High School. She later moved to Lebanon, Indiana where she worked as a salesclerk for K-Mart, Big Lots, and Big R; and retired in 1994.

She loved tending to her flowers and garden. She enjoyed finding bargains at garage sales and auctions. But above all, Grace loved her family with her whole heart.

In addition to her parents, Grace was preceded in death by a longtime companion, Eugene Charles Taylor.

Memorial Services are planned for 3:00 p.m. on Friday, September 24, 2021 at Myers Mortuary, 1502 North Lebanon Street in Lebanon, Indiana
Visitation will be held from 2:00 p.m. until the time of service on Friday at the funeral home in Lebanon.

Boone County Crematory have been entrusted with her cremation arrangements.

Memorials in Grace’s memory may be directed to the charity of the donor’s choice.